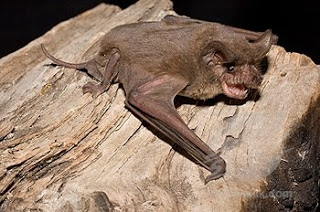 The Brazilian Free-tailed Bat is a member of the Molossidae family, the Brazilian free-tailed bat has the characteristic mouse-like tail protruding beyond the flight membrane stretched between its hind legs. Relatively plain when compared to many bats, this species has brown fur, large ears that are nearly square, and a strongly wrinkled upper lip. However, it is superbly adapted to its aerial lifestyle, having long, narrow wings with pointed tips to enable very fast flight, and long hairs on the toes to judge flight speed and turbulence. The hind legs are short and powerful, making this bat an excellent climber.

Millions of Brazilian free-tailed bats spend their summers in the southwestern United States. Gigantic colonies summer in Bracken Cave, Texas; Carlsbad Caverns, New Mexico; and even within the city of Austin, Texas, under the Congress Avenue Bridge. They are a spectacular sight spiraling out of their day roosts like great, dark, swirling clouds when they emerge in the evening to forage. The bats eat untold numbers of insects each night, sometimes catching their prey at altitudes of a mile or more. They typically migrate to central and southern Mexico in the winter, where they live in smaller colonies. They mate there, and fly north again – as far as 1,300 km – between February and April. Females give birth to a single pup, in June, and nurse it for about six weeks. Although they number in the millions, conservation is a concern, because they raise their young in a limited number of caves, and because pesticides can accumulate in their body tissues.

A particularly well-studied species, the Brazilian free-tailed bat exhibits some spectacular behavior. It forms the largest warm-blooded colonies in the world, emerging to feed at dusk in huge columns of several million individuals. Their flapping wings create a sound equivalent to a white-water river and their numbers are great enough to be detected by airport and weather radars. Feeding for longer each night than any other bat species, it travels as far as 31 miles from the roost to the feeding grounds and uses echolocation to find its prey. The Brazilian free-tailed bat flies at up to 47 mile per hour in open spaces, foraging with fast, straight flight. Each bat consumes between 200 and 600 insects a night, selecting mainly moths, but also eating beetles, flying ants and leafhoppers. The Brazilian free-tailed bats of Texas are estimated to consume from 6,000 to 18,000 metric tons of insects each year, many of which are agricultural pests. At dawn, they return to their roosts where they swarm before re-entering. Thought to be a predator-avoidance tactic, the bats gather into groups at a great height above the cave, before closing their wings and dropping rapidly in one continuous stream. Predators waiting at the mouth of the cave to catch emerging bats include red-tailed hawks, owls, raccoons, opossums, skunks and snakes. Mating takes place in March and shortly afterwards the females migrate to female-only maternity roosts. Most adult males do not leave the tropical and subtropical part of the range and therefore contribute nothing to rearing the young. Gestation lasts for 90 days and females give birth within around 15 days of each other to a single young, known as a pup. The female clings to the roost with both thumbs and one or both feet to give birth, and remains attached to the pup via the umbilical cord for up to an hour while she cleans and nurses her offspring. In the first hour the young bat learns to cling to the roost wall and other bats with its hands, feet and teeth. Once stable, the female pulls away from the pup, dislodging the placenta, which hangs from the pup until it dries out and falls off several days later. During this time the number of bats in the roost doubles, and a female must locate her own pup by listening for its calls. She may land several times, eventually finding her pup by scent. Once reunited she touches the top of its head with her muzzle to confirm the bond. A consequence of the enormous number of bats in a single cave is the build up of guano, or bat droppings. This nutrient-rich mixture was once commercially extracted from caves on a large scale, to be sold as fertilizer. In the early 1900s it was the largest mineral export from Texas after oil, and it continues to be sold commercially although to a lesser degree. Bat caves are widely known to contain noxious gases, but this is actually a result of carpet beetles (Dermestidae) that feed on guano and fallen bats. These beetles multiply so rapidly as a result of such a constant food supply that the whole floor of a cave may be ‘carpeted’ with them, hence their common name. They produce waste that combines with water vapor to make ammonium hydroxide which is poisonous to most animals. Bats have adapted to this potent atmosphere by lowering their metabolic rate, which causes the level of carbon dioxide dissolved in their blood to rise, thus neutralizing the ammonia. Their fur, however, may become bleached to a reddish-brown color. The first flight of the five-week-old bats is fraught with danger as they become used to their wings and echolocation system. Collisions, failed flights, and unsteady landings can result in bats falling to the cave floor, where they are stripped to the bone in minutes by the beetles.

The Brazilian Free-tailed bat (Tadarida brasiliensis) is a member of one of the widely distributed genera of bats in North and South America. Extensive studies on their range have yet to be completed, especially within South America; however they have been found throughout the much of the United States, Mexico, Central America, and southwestern South America, including Brazil, Chile, and Argentina. In the United States Tadarida brasiliensis is found from southern Oregon to Nevada and eastward to North Carolina and southwestern Virginia. In the last 50 to 100 years, Tadarida brasiliensis populations have declined, possibly due to a decrease in habitat, damage to roosts, and indirect consumption of pesticides.

Despite its name, the Brazilian free-tailed bat is actually widespread throughout South, Central and North America. It has fairly complex migratory habits; some populations travel from the extreme north of the range to the extreme south, whilst others remain resident year-round. The largest and most well-known populations are found in Mexico and Texas, USA. There are nine subspecies in total; all occupy different ranges and have different migration routes. The population is thought to total between 95 and 105 million individuals, with Bracken Cave in Texas holding between 20 and 40 million individuals alone. In World War II this species was secretly investigated by the U.S. Air Force for its potential to carry tiny bombs into Japan. Bat caves were carefully guarded but the bats refused to cooperate, instead wreaking havoc in Air Force bases.

There has also been an occurrence of the Brazilian Free-tailed Bat in southeastern Virginia.