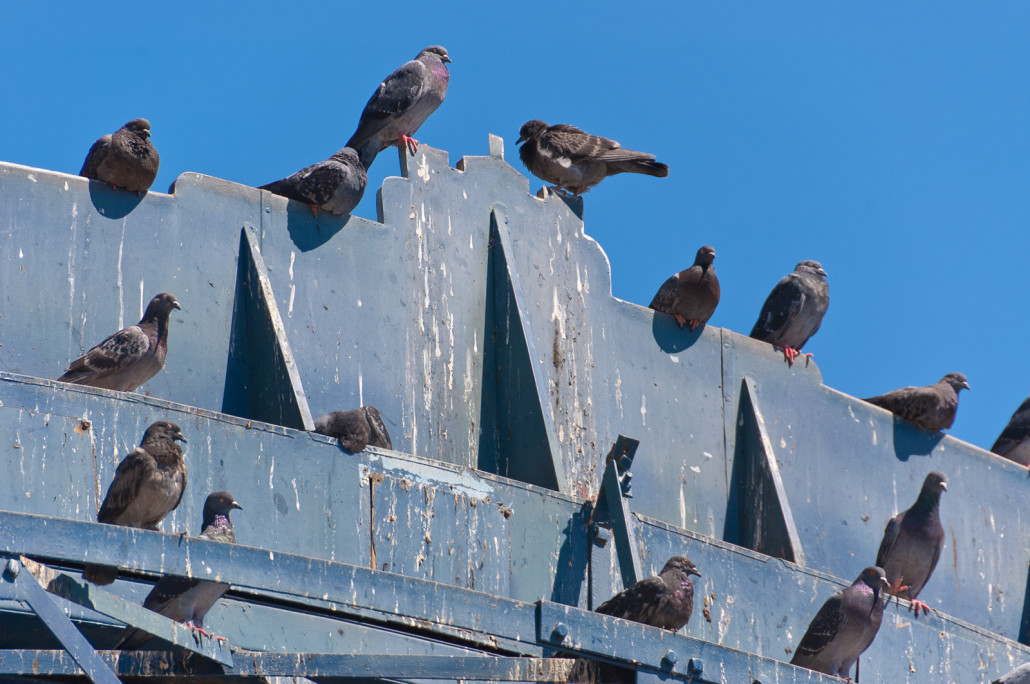 Pigeon Removal, Pigeon Control & Pigeon Trapping in Central Virginia. Pigeon removal services are one of our specialties. We provide top rated pigeon control, pigeon removal, pigeon capture, pigeon trapping and pigeon management for residential and commercial customers in the Henrico, Glen Allen, Richmond, Midlothian, Charlottesville, and Central Virginia areas. Our Expert Bird Control Technicians have the knowledge and skills to remove pigeons from all structures including homes, shopping centers, office buildings, stores, schools, hospitals, factories and many other types of businesses. For help with your bird problem call us today at (804) 729-0046 or toll-free at (888) 824-7383. We can discreetly resolve any bird control pest.

Pigeons (Columbia livia) typically have a gray body with a whitish rump, two black bars on the secondary wing feathers, a broad black band on the tail, and red feet. Body color can vary from gray to white, tan, and black. The average weight is 13 ounces (369 g) and the average length is 11 inches (28 cm). When pigeons take off, their wing tips touch, making a characteristic clicking sound. When they glide, their wings are raised at an angle.

Pigeons are found throughout Richmond, Virginia and the rest of the United States (including Hawaii), southern Canada, and Mexico.

Pigeons are highly dependent on humans to provide them with food and sites for roosting, loafing, and nesting. They are commonly found around farm yards, grain elevators, feed mills, parks, city buildings, bridges, and other structures.

Pigeons are primarily grain and seed eaters and will subsist on spilled or improperly stored grain. They also will feed on garbage, livestock manure, insects, or other food materials pro- vided for them intentionally or unintentionally by people. In fact, in some urban areas the feeding of pigeons is considered a form of recreation. They require about 1 ounce (30 ml) of water daily. They rely mostly on free-standing water but they can also use snow to obtain water.

The common pigeon was introduced into the United States as a domesticated bird, but many escaped and formed feral populations. The pigeon is now the most common bird pest associated with people.

Pigeons are monogamous. Eight to 12 days after mating, the females lay 1 or 2 eggs which hatch after 18 days. The male provides nesting material and guards the female and the nest. The young are fed pigeon milk, a liquid- solid substance secreted in the crop of the adult (both male and female) that is regurgitated. The young leave the nest at 4 to 6 weeks of age. More eggs are laid before the first clutch leaves the nest. Breeding may occur at all sea- sons, but peak reproduction occurs in the spring and fall. A population of pigeons usually consists of equal numbers of males and females.

In captivity, pigeons commonly live up to 15 years and sometimes longer. In urban populations, however, pigeons seldom live more than 3 or 4 years. Natural mortality factors, such as predation by mammals and other birds, diseases, and stress due to lack of food and water, reduce pigeon populations by approximately 30% annually.

Pigeon droppings deface and accelerate the deterioration of buildings and increase the cost of maintenance. Large amounts of droppings may kill vegetation and produce an objectionable odor. Pigeon manure deposited on park benches, statues, cars, and unwary pedestrians is aesthetically displeasing. Around grain handling facilities, pigeons consume and contaminate large quantities of food destined for human or livestock consumption.

Pigeons may carry and spread diseases to people and livestock through their droppings. They are known to carry or transmit pigeon ornithosis, encephali- tis, Newcastle disease, cryptococcosis, toxoplasmosis, salmonella food poisoning, and several other diseases. Additionally, under the right conditions pigeon manure may harbor air- borne spores of the causal agent of histoplasmosis, a systemic fungus disease that can infect humans.

The ectoparasites of pigeons include various species of fleas, lice, mites, ticks, and other biting insects, some of which readily bite people. Some insects that inhabit the nests of pigeons are also fabric pests and/or pantry pests. The northern fowl mite found on pigeons is an important poultry pest.

Pigeons located around airports can also be a threat to human safety because of potential bird-aircraft collisions, and are considered a medium priority hazard to jet aircraft by the US Air Force.

Feral pigeons are not protected by federal law and most states do not afford them protection. State and local laws should be consulted, however, before any control measures are taken. Some cities are considered bird sanctuaries that provide protection to all species of birds.

Economics of Damage and Control Pigeons

Structures inhabited by pigeons can sustain damage from droppings and harbor disease. The droppings can also make structural surfaces slick and hazardous to walk or climb on.

Washing acidic accumulations of drop- pings to prevent structural damage can cost in excess of $10,000 per year. The longevity of industrial roofing materials can be adversely affected by droppings, resulting in expensive replacement costs.

Employee health claims and lawsuits resulting from diseases or injuries attributed to pigeons can easily exceed $100,000.

An integrated pigeon management program incorporating lethal and nonlethal control techniques is well worth the investment when considering the economic damage and health threats caused by large populations of pigeons.