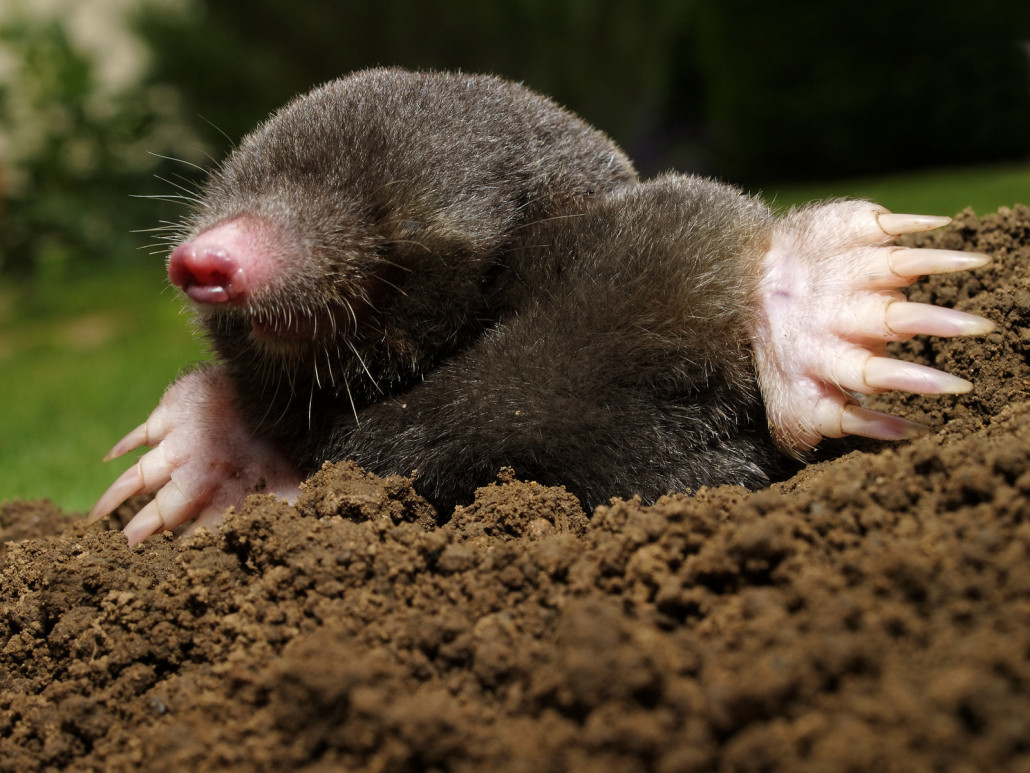 Got moles? Mole Removal, Mole Trapping & Mole Control in Central VA. Are moles digging in your yard or damaging your lawn? We provide safe and effective mole trapping, mole removal, mole capture, mole control and mole management in the Richmond and Central Virginia areas. Many people ash us, “How much does mole removal cost?” Contact us at (804) 729-0046 or toll-free at (888) 824-7383 so we can discuss your particular situation and how we can help resolve your mole problem.

Moles in Richmond VA and other areas of Central Virginia live underground and inhabit the lawns of residential homes, golf courses, cemeteries, and parks, as well as fields, forest edges, or pastures where moist soils are common and digging is easy. Three species of moles are native to Virginia:

The type of soil, its moisture content, and the availability of food all can limit mole activity. In general, moles tend to avoid heavy clay or stony, coarse gravel soils where tunneling is difficult. Similarly, areas with soils that are either too dry or too wet to maintain the structure of their tunnel system usually are avoided. The star-nosed mole prefers habitats with damp (not saturated) soils, particularly near streams, lakes, and wetlands, whereas both the eastern and hairy-tailed moles prefer the drier soils of upland habitats. Individuals of any of the three species can swim, but the star-nosed is most adept and seen frequently in water.

Moles are approximately 4-8 inches in length from nose to tail. They have short, powerful forefeet with broad outward-turned palms and prominent digging claws, small eyes and ears, short, black or brownish-gray velvety fur, and a somewhat elongated head and snout. The snout of the star-nosed mole, as its name suggests, is characterized by a prominent fleshy protuberance with 22 short “tentacles” radiating from it. These tentacles are believed to aid the animal in sensing its environment and are found in no other mammal. Eastern and hairy-tailed moles may be distinguished by differences in their tails. The tail of an eastern mole is short (0.6-1.2 in.) and naked whereas that of the hairy-tailed is slightly longer (0.9-1.4 in.) and covered with short, stiff hairs. Male eastern and hairy-tailed moles typically are larger in size than respective females whereas both male and female star-nosed moles are approximately equal in size. Tactile hairs on the snout, forepaws, top of the head, and tail enhance a mole’s sense of touch; moles have a poor sense of smell and are virtually blind (but they do detect light and dark).

Although many people believe that moles are rodents, like mice or rats, they actually are members of the scientific order Insectivora, which includes animals like shrews and bats. The diet of a mole consists of earthworms, snails, slugs, and insects (both adult and larval stages), but also may include small amounts of vegetation and seeds taken inadvertently. Moles destroy very few plants or bulbs by direct feeding, but may dislodge plants while tunneling in search of food. Because they expend a tremendous amount of energy when constructing tunnels, moles often remain active day and night year-round in their search for food. They often consume an amount of food equal to 60-100% of their body weight daily. To satisfy this almost insatiable demand for food, one mole can dig up to 150 feet of new tunnels each day. They are most active in early morning and late evening on damp, cloudy days during the spring and fall and may be seen above ground at night or when they disperse to new areas.

Moles typically are solitary creatures, although the star-nosed mole is somewhat more social than either the eastern or hairy tail mole. The only time individuals are seen together is during the spring (February-March) breeding season or when a female is rearing young. After a 4-6 week gestation period, females produce one litter of 2-5 young (up to 7 with star-nosed moles) each year. Nest chambers are constructed 12-18 inches underground, often beneath a large stone, tree, sidewalk, or roadway. Young moles leave the nest at about 5-6 weeks of age and become sexually mature by the end of their first year. Moles may live up to 4 years in the wild. Predators of moles include snakes, skunks, foxes, weasels, hawks, owls, and domestic cats and dogs.

Moles construct two types of tunnels-those at or near the ground surface and those deep (6-20 in.) underground. The networks of interconnecting trails visible above ground and just under the surface are feeding tunnels that often are used only once.

Deep tunnels are the highways that lead between feeding areas and the living chambers and also provide cover against predators. Hairy-tailed moles have been observed using the same burrow system continuously for up to 8 years, but this is not common. Although all species of moles make feeding tunnels, eastern moles usually create the prominent ridges of heaved soil visible at the surface whereas star-nosed moles typically are responsible for the large (1-2 ft. diameter, 4-9 in. high) “mole hills” that give the appearance of a basketball being pushed up through the soil.

Economic Status and Importance of Moles

Moles are extremely beneficial because they consume the larvae and adults of numerous pest insects, such as Japanese beetles, that affect garden, landscape, and flowering plants. Additionally, their tunneling activity loosens the soil, improves aeration, and mixes deeper soils with surface organic material, all of which enhance soil quality. However, moles can be a nuisance where their tunneling disturbs lawns and recreational facilities. Although moles frequently are blamed for feeding damage on the roots of vegetation or seeds planted in gardens, they rarely cause such damage. Garden plants may be uprooted or heaved out of the soil inadvertently as these animals burrow. In fact, commercial bulb growers and producers of row crops can sustain economic loss from moles where plants are dislodged and subsequently become desiccated and die, or when harvesting equipment comes in contact with the raised mounds or ridges created by moles and is damaged.

Management Options for Moles in Your Yard

For commercial agricultural producers, elimination of moles over large areas is difficult, if not impossible. For the homeowner, problems with moles usually can be managed by hiring a mole removal company with experience in mole removal. Because of the mole’s solitary habit and a rather low productivity, most residential yards can be maintained “mole-free” for a number of years. The sonic or vibration producing devices advertised commercially as mole deterrents generally have no proven effect on moles. Similarly, many “home remedies,” such as gassing with auto exhaust, placing broken glass, pins or other sharp objects in the tunnels, and use of harsh household chemicals, usually are totally ineffective, can be hazardous to residents and nontarget animals, and may be illegal.

Fumigants, Repellents, and Toxicants for Mole Control in Central Virginia

Although several fumigant products are registered for use in Virginia, all formulations are classified as “Restricted Use Only” products. Similarly, many formulations of registered toxicants developed to kill moles also are classified as “Restricted Use Only” products. In such situations, unless you have current Pesticide Applicator Certification in Category 10 (Vertebrates), these materials are unavailable to you. Therefore, use of fumigants and toxicants should be left to licensed or certified pesticide applicators. In instances where use of a particular toxicant formulation is not restricted (e.g., certain formulations of chlorophacinone and zinc phosphide), it is imperative that these materials are placed into the burrow system below ground as a means to reduce nontarget exposure. One thought to keep in mind-given that moles are insectivores, they usually don’t recognize treated grains or pellets as food. Therefore, toxicant treatments often are ineffective in reducing mole activity and damage.

In the past, insecticides frequently were applied to lawns in an attempt to reduce populations of various beetle grubs, which are a major food of moles. The assumption used to justify this approach was that with a reduced food supply, moles would leave the area. However, in practice, applications of insecticide rarely were effective in removing all potential food sources. Because moles feed on such a variety of invertebrates, not just grubs, they simply switch to another readily available food (usually earthworms or night crawlers) rather than leave the area. Furthermore, some insecticides that have been applied in the past were toxic to wildlife, particularly granular formulations that were especially attractive to songbirds. This approach is no longer recommended-insecticides should be used to resolve insect problems, not mole problems.

White milky spore, a naturally-occurring fungus now available in commercial form, has been promoted as a means to help reduce the number of grubs and somewhat limit the mole’s food supply. However, the fungus does not seem to survive well in cold climates, so it may not persist through the winter months, particularly in the western parts of the commonwealth. Additionally, even where milky spore is present, it is effective only on certain insects. Thus, with other natural food items still available, this option alone may not provide desired control.

Until recently, repellents have not been proven effective in reducing or eliminating mole activity. A new repellent formulation, which contains castor or ricinus oils, recently received registration for use in Virginia. This repellent is designed to be applied as a soil drench. However, because this product is relatively new, comprehensive testing has yet to be performed to assess its overall effectiveness under field conditions in Virginia.

Creating Barriers for Moles in Your Yard or Lawn

Sometimes limited areas, such as seedbeds or small gardens, sustain persistent mole damage. For such areas, installation of a perimeter barrier constructed of sheet metal or hardware cloth may be appropriate. To install such a barrier, first dig a trench about 12-15 inches deep and 10 inches wide around the entire outer edge of the bed to be protected. Place about 8-10 inches of the barrier material into the bottom of the trench, then fold or bend the material upright to create an “L” with the foot of the “L” extending out away from the bed. The barrier material should then extend upward and about 5 inches above the ground surface for complete protection. Backfill the trench with soil to hold the barrier in place and to give it support. All connections in the barrier, especially the corners, must be secure if this barrier is to be effective.

Mole trapping to address a mole problem in your yard is best left to a mole removal specialist. They can quickly assess the situation and formulate a plan for your particular problem. Since moles do not hibernate, mole trapping can be done year round. However, the best time to trap moles is in the spring, as soon as the first ridges are noted, or after the Fall rains. The identification of main or frequently-used runways is of prime importance and usually requires the expertise of a mole removal company. It is illegal in Virginia to transport and liberate any wild animal captured on your property to property of another (including federal, state, or municipal lands) unless you have first obtained a permit to do so.

Although a variety of “kill traps” (e.g., harpoon, scissor, or body gripping types) can be purchased at many farm supply and hardware outlets, their use as a means of eliminating or reducing mole damage can be dangerous. These traps often are difficult to set and properly place without risking personal injury. Additionally, there is potential for injury to small children and pets that play near or with unattended mole traps. For these reasons, lethal trapping should be left only to those Wildlife Control Technicians trained in the operation of such devices and the handling of wild animals. (Source: Virginia Tech).