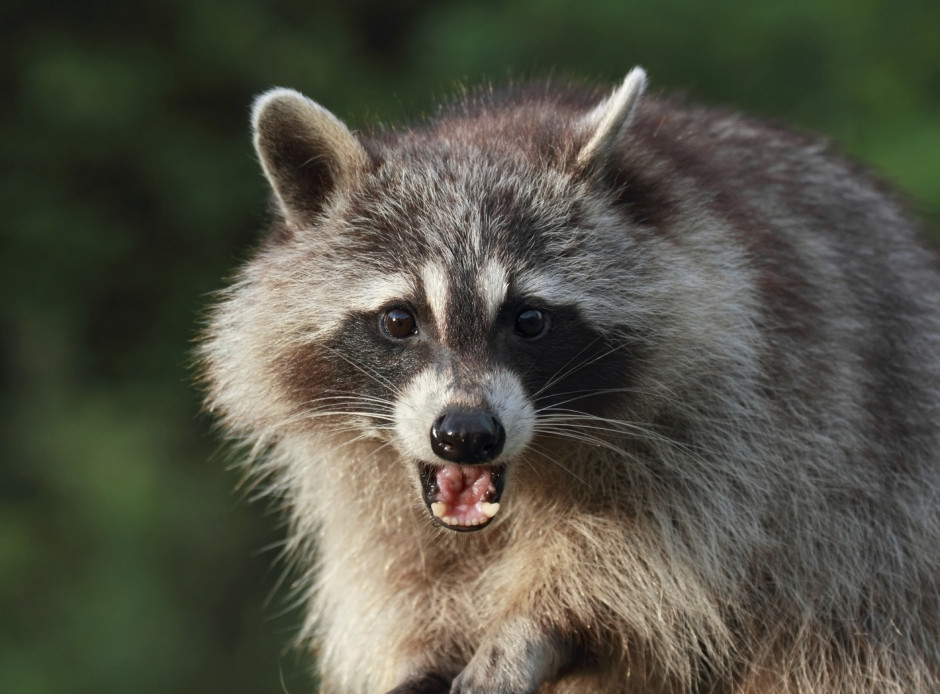 Raccoon Removal, Raccoon Trapping & Raccoon Control in Central Virginia. Our Wildlife Control Technicians are experts in raccoon removal, raccoon trapping, raccoon control, raccoon capture, raccoon exclusion and raccoon management in the Henrico, Glen Allen, Richmond, Midlothian, Charlottesville and Central Virginia areas. Let our local raccoon experts safely and humanely get rid of raccoons that have taken up residence in the attic of your home or business. We also can safely remove raccoon poop (raccoon feces) which usually contain a parasite called Raccoon Roundworm that is transferable to humans. We do not offer free raccoon removal, but our prices beat our competitors prices hands down.

The major problems associated with raccoons in Henrico, Glen Allen, Richmond, Midlothian, Charlottesville, and Central Virginia is their ability to invade houses or trashcans, get into chimneys and fireplaces, and raccoons that get into attics of Virginia homes. Raccoons are very adaptable animals in urban areas, and are nocturnal, meaning they come out mostly at night; however just seeing raccoons during the day is not a sign of rabies. They are commonly seen during the day in urban and suburban areas and are usually attracted there by a food source or an easily accessed area to make a den such as under attics, vents, sheds, porches, decks, crawl spaces and out-buildings. The best way to prevent raccoons from becoming a problem is to not give them a reason to come to your home or business.

Ways to Minimize the Risk of Having Raccoon Problems

Q.  What do raccoons eat?

A.  What do raccoons like to eat is a question we are often asked by our Central Virginia customers. Raccoons like humans are omnivores. Raccoons eat berries, other fruits, nuts, grains, and vegetables. They also eat insects, eggs, poultry, rats, squirrels, small livestock, birds, fish, snakes, crayfish, worms, frogs, and mollusks. Additionally, raccoons will eat pet food, carrion, and human garbage. Raccoons like to eat many different kinds of food, but what they actually eat often depends on what is available. As expected, the foods available to raccoons in the country are frequently different from the foods available to raccoons in urban areas.

A.  Yes raccoons are primarily nocturnal by nature. While it is true that a rabid raccoon will exhibit a variety of unusual behaviors, activity during daytime is most definitely not a guaranteed indicator of rabies. You see, although raccoons are primarily nocturnal, they do often get some stuff done during the day, and we have seen older raccoons feeding during the day to escape the feeding pressures from younger and stronger raccoons.

A. Raccoons like most wild animals are unpredictable. While dogs may attack a raccoon, a cat will generally pretend to ignore coons, and try to be ‘co-incidentally’ elsewhere while the raccoon is around. Since raccoons usually ignore or avoid cats, the two species often get along fine by not getting along together at all. This does not mean that conflict may not arise, and certainly raccoons are a much more powerful animal when compared to cats.

Q.  How to keep raccoons away?

A. Raccoons are becoming more urbanized animals and are losing their fear of humans. Raccoons are FAR more common in cities and suburbs than they are in undeveloped natural areas. Thus, raccoon-human encounters are very common. Raccoons are smart, curious, and agile, so in short, there’s really no way to simply keep them away. There is absolutely no such thing as a raccoon repellent product that works. Those high-pitch ultrasonic noise making machines are totally useless – the FTC issued a warning against them. No powder or spray will keep a raccoon away, it’s just not that easy to keep urbanized raccoons out of Richmond VA and Charlottesville VA homes.

A. Raccoon sounds range from the vocalizations the animals use to communicate with each other, to the noises they make as a result of their rustling, scurrying, and other activity. Baby raccoon sounds include mewing, crying, and whining. Even when raccoons are quiet vocally, they still make noise. Click

Q.  When do raccoons have babies?

A. In the Richmond and Charlottesville areas of Virginia, a raccoon uses several dens within its home range. Raccoon babies stay with their mother close to a year. Female raccoons give birth to an average litter of 3 – 4 baby raccoons each Spring. Raccoons do not hibernate, but they do go through a period of decreased activity during the winter which is also their mating season.

A.  We do not recommend killing a raccoon for the sake of killing them. If you want to get rid of a problem raccoon, call a local professional raccoon removal company in the Richmond or Charlottesville area of Virginia or look into using a cage trap. If you choose to use a cage trap, remember that raccoons can be aggressive and dangerous. Also, it’s against the law for you to transport or relocate raccoons in Virginia. We NEVER recommend the use of poisons to kill a raccoon. Poison is also a terrible way to die, and that’s assuming the animal eats enough of the poison to actually die. It may also be illegal to poison raccoons in Virginia.

Q.  How to get rid of raccoons in your yard?

A.  Secure garbage bins and remove trash. Identify areas of damage. Knowing where a raccoon is spending most of its time on your property will help to target the best control method. Remember the best way to get rid of a raccoon is by applying several raccoon control methods at once.

Q.  How to get raccoons out of attic?

A.  Raccoon babies must be removed by hand – the local wildlife control technician from Richmond or Charlottesville that we send to your home or business must go into the attic and remove the babies by hand. We can then use a trap or catch pole to remove the female raccoon.

A.  Three common dangers that a raccoon poses include disease, property damage, and attacks on pets. Raccoons can carry several dangerous diseases including rabies. While incidents of a rabid raccoon attacking humans are rare in the Richmond and Charlottesville areas of Central Virginia, it’s not something you want to risk.

A.  First, what you can’t do. It is against Virginia law and the laws of Richmond and Charlottesville VA for you to transport the  raccoon and / or relocate the raccoon to some other location. Doing so can result in criminal charges being placed against you. Only properly licensed Virginia wildlife removal technicians can transport wildlife, and even we aren’t allowed to relocate wild animals. We prefer that you leave raccoon removal in Richmond and Charlottesville VA to the pros, but if you’ve trapped a raccoon in your own trap we’ll be glad to remove it for a fee.

Don’t make the mistake of buying a raccoon cage and trying to trap the raccoon yourself. Raccoons can be dangerous AND it is against Virginia state law for you to transport or relocate wildlife in VA. For fast and effective raccoon trapping in Central Virginia contact us at (804) 729-0046 or toll-free at (888) 824-7383.

Read our blog post on raccoon removal in Richmond VA or removing raccoons in the attic for some great tips on dealing with problems caused by these masked critters.