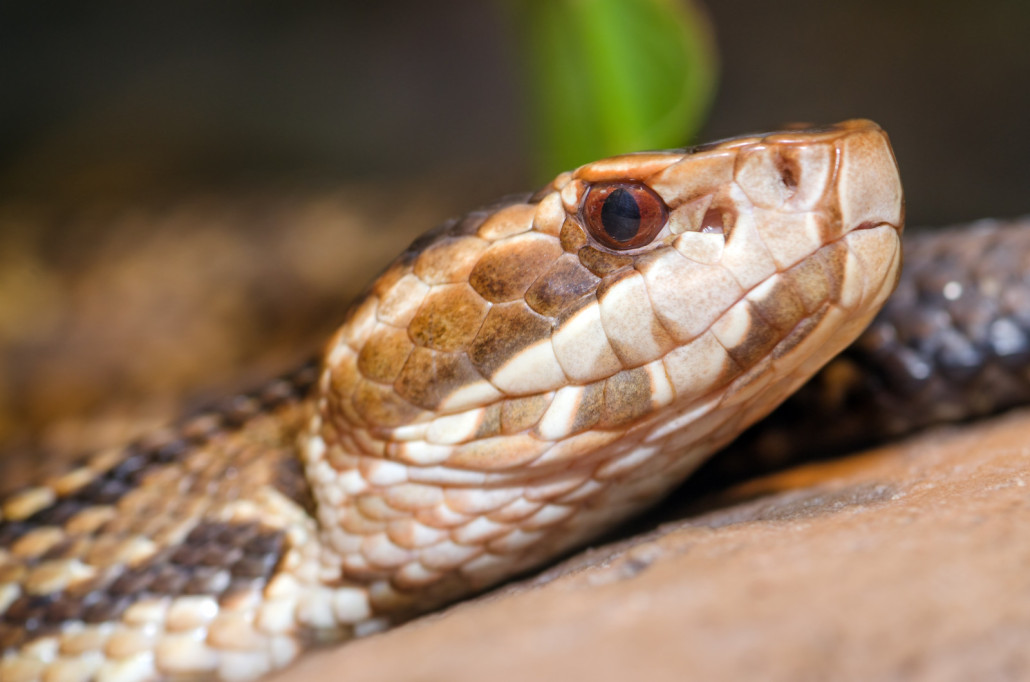 Water Moccasin Snake Removal, Control & Trapping in Central Virginia. The Water Moccasin snakes and the Cottonmouth snake is the same species of snake and is primarily located in the southeastern areas of Virginia. It is a semi-aquatic snake and can be found in fields, forests, marshes, swamps, drainage ditches, lakes ponds and rivers of Southeast VA. They often burrow in sandy banks and in rotting logs near the edge of the water. They can be seen sunning themselves on the banks of these areas in the heat of the day. Even though they can be seen sunning themselves during the day, they are the most active at night in Virginia. These snakes have not been observed in the Richmond area of Virginia. Water Moccasin Snake removal and control in and around your home can be a very time-consuming undertaking. Water Moccasin’s are one of the more aggressive snakes that a wildlife animal control operator is called to deal with. Water Moccasin snakes can be found mostly in the southern states as they enjoy the mild to hot weather that is found in the Southern states.

The removal, control and trapping of Water Moccasin snakes can be difficult and should not be done by anyone but a professional snake removal technician trained in their proper handling and removal. Water Moccasin snakes are considered venomous snakes and their bites can be deadly, particularly if left untreated. Controlling Water Moccasin snakes consist of a two basic steps. The first is removing the snake, followed by removing all possible food sources. This includes lizards, frogs, and many different types of fish. Controlling the snakes in a environment such as a pond or a small water feature can be a relatively easy task. But controlling the cottonmouth snake in an environment such as a lake or a river can involve a product called snake fencing. This product can be very expensive if used in a large area. You should always consult a wildlife animal control professional when dealing with Water Moccasin snakes. They are trained and equipped to handle and remove these snakes safely.

WATER MOCCASIN SNAKES PHYSICAL DESCRIPTION: The length of this species is 2.5 – 4 feet. They may reach 6 feet in length. This is a large, stout, venomous aquatic snake. It is olive green, brown or black above with the belly lighter. The crossbands have dark, more-or-less distinct borders. The centers of the crossbands are often invaded by a lighter ground color. Old adults may be completely dark and unpatterned. The snout is light in color and usually has a vertical dark line on each side of the rostrum. The scales are weakly keeled. The head is flat with a pit between the eye and nostril. Heads are triangular with the dorsum portion being flat; neck is much narrower; males are larger than the females; juveniles have the same patterns as adults but are brighter in color and the crossbands a more prominent; the body color may be more of a pinkish color and they have the sulfur yellow tip of the tail. The eyes have vertical pupils like a cat.

WATER MOCCASIN SNAKES REPRODUCTION: The females are sexually mature in their third year, but probably don’t mate until the fourth year thereafter they mate biannually. The female gives birth to 1 – 15 young per litter, with an average of 5 – 9. They are born alive from mid- August to mid-September. After a gestation period of 4 – 6 months. The young have a broad dark band through the eye and a yellow tip on the tail. The females tend to aggregate if gravid or attending young. This is probably to guard the young by banding together to exhibit more strength. The young are 10 – 13 inches at birth. They are viviparous, mate mainly in the spring and occasionally in the fall; observations of birth occurred in September; females appear to have a biennial to triennial cycle of litter production.

WATER MOCCASIN SNAKE BEHAVIOR: They are fond of basking on a rock, log, or stump during the day. They are very pugnacious. If approached, this species will stand its ground, or crawl away very slowly. If it stays, it will coil. It slowly vibrates its tail, and will open its mouth, or gape, to reveal its white mouth. It will strike repeatedly against humans. When swimming, it carries its head out of the water and appears to be rather buoyant. Males are known to perform a combat dance; generally not aggressive but do not hesitate to strike if molested; they emit a musk from a gland at the base of the tail and increase the amount given off when captured. Active during the day and night, the water moccasin snake feeds on fish, amphibians, reptiles, small mammals, and invertebrates.