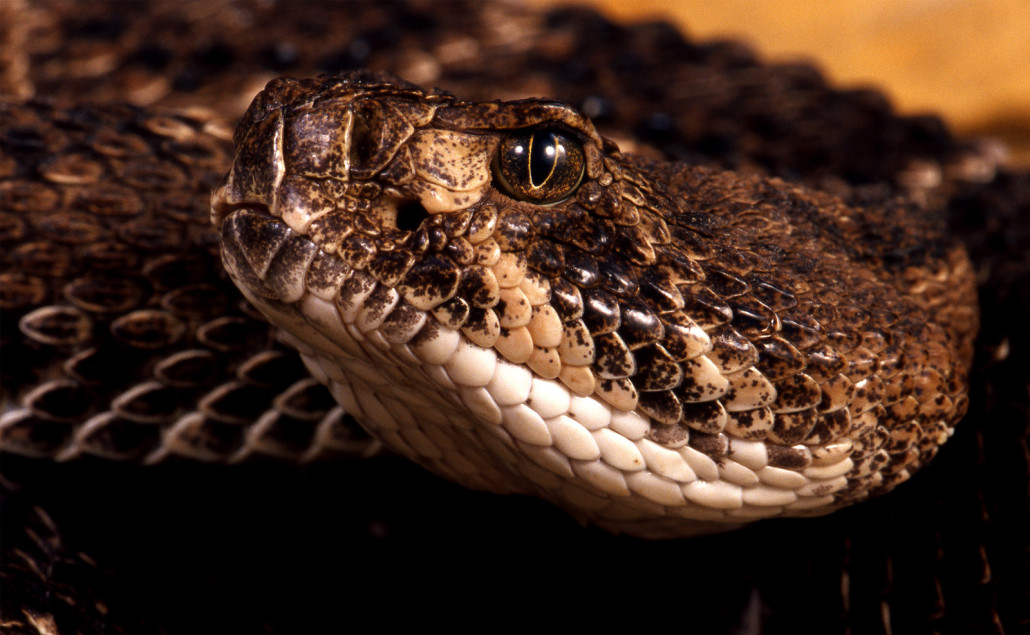 Rattlesnake Removal, Rattlesnake Trapping & Rattlesnake Control in Central Virginia. The removal, control and trapping of rattlesnakes in Virginia can be dangerous and should not be done by anyone but a professional snake removal technician trained in their proper handling and removal. Rattlesnakes are considered venomous pit viper snakes and their bites can be deadly, particularly if left untreated. Controlling rattlesnakes in Virginia consists of removing the snake, followed by removing all possible food sources. You should always consult a wildlife animal control professional when dealing with rattlesnakes. They are trained and equipped to handle and remove these snakes safely. Our snake trappers are experts in trapping snakes that have gained access to your house, attic, walls, barn, roof, chimney, shed or other areas of your home. Snakes will be trapped and removed. Snake skins and other messes made by snakes will be safely removed from walls, attics, sheds etc. Dead snakes or baby snakes will also be carefully removed if found in your Virginia home.

TIMBER RATTLESNAKE POPULATIONS: The species may be rare in parts of its range, particularly on the periphery.

TIMBER RATTLESNAKES PHYSICAL DESCRIPTION: Rattlesnakes have the following characteristics that distinguish them from similar looking non-venomous snakes: 1) short tail and rattle, 2) single row of transverse scales on underside of tail, 3) stout body girth, 4) facial pit, 5) small dorsal head scales, and 6) vertical pupils of the eyes. The length of this species is from 10-60 inches with the maximum of 6 feet. Males are generally larger than females, and southern populations are typically larger than northern populations. Adult males tend to be 12% longer than adult females. There are two major color phases though individuals vary along a continuum between the light and dark phase. The yellow morph or phase is characterized by a yellow or tan ground color with dark brown or gray bands. There is occasionally a dorsal rust-colored band and a yellow or tan head. The belly is yellowish cream in color and the tail is a uniform black. The dark or black morph is characterized by a black ground color with black or dark gray dorsal bands or blotches. Occasionally, a dorsal rust colored band is present. The head is black or gray. The belly is mottled yellow-gray and the tail is uniformly black. Prior to their neonatal molt, newborn timber rattlesnakes are best described as gray. Newborns may have a distinctive reddish mid-dorsal stripe. Following the neonatal molt and certainly by the age of 1 year, adult coloration is evident.

TIMBER RATTLESNAKES REPRODUCTION: Timber rattlesnakes have the following life history characteristics: low reproductive rate, stochastic reproductive events, high mortality in juveniles, low adult mortality, and a long natural lifespan. Breeding season lasts from approximately late July to mid-September. Spring mating is rare and has not been reported in the Appalachians. Males exhibit ritual fighting and territoriality during the mating season and may travel as far as 4 miles during the breeding season in search of females. Timber rattlesnakes give birth to live young from August to October with most births occurring between late August and early September. Females typically become sexually mature between 4 and 5 years of age; males become sexually mature between 3 and 4 years old. However, they do not usually breed before 6 years of age. Brown (1991) found that 57% of females reproduced at 3 year intervals and that 27% reproduced at 4 year intervals. The average interval in Virginia is 3.3 years. Timber rattlesnakes may continue to breed into their 30’s. Average litter size is 8, but ranges from 3 to 18. Births take place in historic communal rookeries located at or near den sites.

TIMBER RATTLESNAKES BEHAVIOR: A lot of variation has been reported in the home range size of timber rattlesnakes. Males will exhibit some territoriality and ritual fighting during the mating season. Males may also travel up to 4 miles over the course of the breeding season in search of females. Nongravid females typically travel 0.75-1.25 mi from the den, while gravid females stay within 0.5 mi of the den. Even outside of the breeding season, males will travel significantly from the den site, often up to 2 miles distant. Timber rattlesnakes overwinter and typically breed in communal dens. Individual rattlesnakes display high fidelity to communal dens and birthing rookeries. Hibernation averages 204 days in length, usually October 10 to May 1. Most overwintering den sites are located in crevices in rock ledges or talus slopes. Depth of the crevice is apparently important in site selection. In addition, most sites have southerly or westerly aspect, however, easterly and northwesterly aspect is not uncommon. Preferred dens are found on steep slopes of 30-45 degrees where the most direct winter sun occurs. Also, such dens are found in sandstones, quartzites, granites, gneisses, and metabasalts and are at elevations of 200 to 1200 meters. The three basic types of dens include: fissure or fissures in a ledge, bare rock talus or scree, and talus or scree partially covered with soil. As noted, these dens are frequently used as communal rookeries. The young, averaging about 11 inches in length, will stay with their mother at the den site until their first molt at 1 or 2 weeks old. At this first molt, the rattlesnake acquires its first permanent rattle. The mother and young will then leave the den to forage until hibernation. Young that are born in late September or early October will go directly to the hibernacula dens and not forage. Young follow adult scent trails to the hibernacula. Young rattlesnakes will typically shed 1 or two more times during their first full summer, reaching a length of about 18 inches prior to hibernation. The following summer they will again shed one or two more times and reach a length of about 24 inches. Timber rattlesnakes will forage in just about any terrestrial habitat. They commonly coil along rodent scent trails and rest their heads on logs or on tree trunks. Post-emergent and pre-shed snakes and gravid females use well-exposed rocks and occasional logs as basking sites. Timber rattlesnakes will begin emerging from the overwintering dens at mid-day early in the spring. General emergence is recorded in Virginia from 18 April to 12 May and is usually diurnal. Initially, movements are near the den with major migration occurring during late May-June when summer-like weather prevails. Foraging occurs primarily from mid-May through August though young and post-partum females may forage in the fall. During warm summer weather, rattlesnakes are active day and night. Gravid females can often be found basking in the morning or all day on cloudy days. Migration toward dens occurs in September with most snakes entering hibernation during early and mid-October. All of the timber rattlesnakes activities and periodicity are highly temperature dependent. Of 115 hibernacula that were studied, all were within 500 meters of exposed basking areas. Space between these dens averaged at the following distances: 1.68 km among 99 dens in Shenandoah, Virginia (range of 0.25-4.5 km); and 0.95 km among 19 dens in Catoctin, Maryland (range of 0.35-3.2 km). The number of snakes in most dens ranged around 30 to 60 individuals. Lesser numbers of copperheads (Agkistrodon contortrix mokasen) shared some of the dens, while several species of non-venomous snakes shared some of the dens, as well. Of the non-venomous species, the eastern rat snake was most frequently observed sharing dens with timber rattlesnakes. The first warm, humid, summer-like evenings seem to trigger the start of the spring migration and foraging period. Dens and spring basking areas were usually deserted by about mid-May, in Martin’s studies. Most timber rattlesnakes, except for gravid females and pre-molt individuals, experience a peak in activity that usually occurs around the second week of June. Though, sometimes this peak would take place as early as late May or as late as early July. In June, ecdysis, or shedding, peaks according to records that show 57% of snakes underwent ecdysis at this time. According to Sealy’s study in the upper piedmont of North Carolina, 1.22 sheds per year was the mean adult shedding rate. Adult snakes averaged one shed per year for each of three or four successive years, then twice in the fourth or fifth year, which equaled an average of 1.2 sheds per year.

TIMBER RATTLESNAKES LIMITING FACTORS: In western Virginia, timber rattlesnakes require long term stable overwintering shelter, a wooded area for foraging, and human disturbance of both of these habitats should be kept at a minimum.

TIMBER RATTLESNAKES POPULATION PARAMETERS: Timber rattlesnake populations are relatively stable on most public lands, however, there has been a drastic decline in the Piedmont region. Mortality is high (33%) during the first year and declines to about 10% as adult. There is a consensus among most scientists and observers that the timber rattlesnake is declining over most parts of its range. Sampling shows a sex ratio of about 2:1 (females:males). However, this may be an artifact of sampling as gravid females are more frequently found basking. The turnover rate of the populations in Virginia is about 10-12%.

The Canebrake rattlesnake in Southeastern Virginia is listed as a State endangered species.