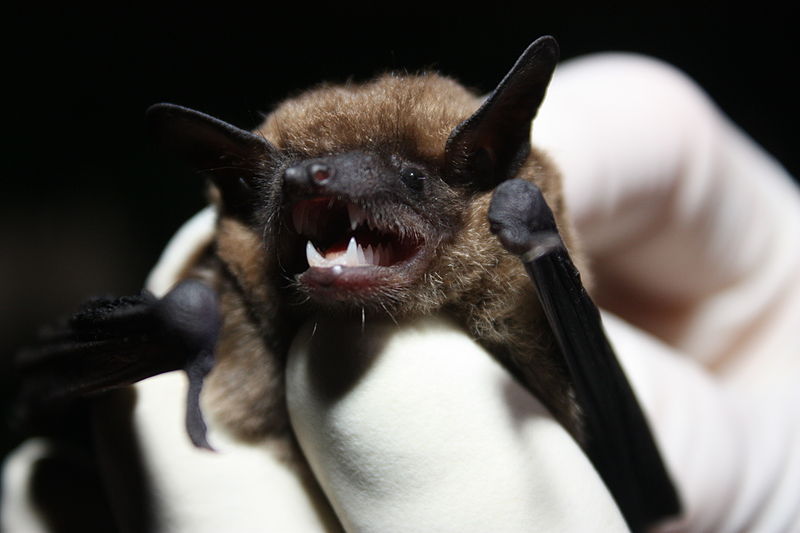 The Eastern Small-footed bat is the smallest myotis in the eastern U.S. with a total length of 2 7/8 – 3 1/4 inches. It has long glossy chestnut brown fur with black accents. It has a tiny foot, short forearm, flat skull and keeled calcar. Little data is available. The single young are born May-July in nursery colonies of 12 to 20 bats sometimes found in buildings. The hardiest species are found in caves/mines of eastern North America, though they generally roost on the ground under rocks, in crevices/occasionally in buildings and under tree bark. They have a characteristic slow flight.. In the Mammoth Cave region of Kentucky, this species is fairly common in late summer in the flocks of migrating bats. The whereabouts of these individuals at other seasons is unknown. The last bat to hibernate was gone by February or March. It is active in late winter and hibernates in cold, dry areas near cave entrances (drafty, low humidity, may be subfreezing). They feed on mosquitoes, small beetles, true bugs and ants. This species is native, but may be rare in the state. The longevity record is 12 years.

The Eastern Small-footed bat may be rare in Virginia. They are found in wild, heavily forested, mountain regions, frequently but not exclusively in caves in hemlock forests. They are known from hemlock forest habitats and from rock falls, caves, mines and rock crevices associated with hemlock forest regions. In summer, it at least occasionally inhabits buildings. Caves and mines are the only known winter habitat. It has been found in mountains rising to 2000 feet.

The Eastern Small-footed bat feed on mosquitoes and small beetles.