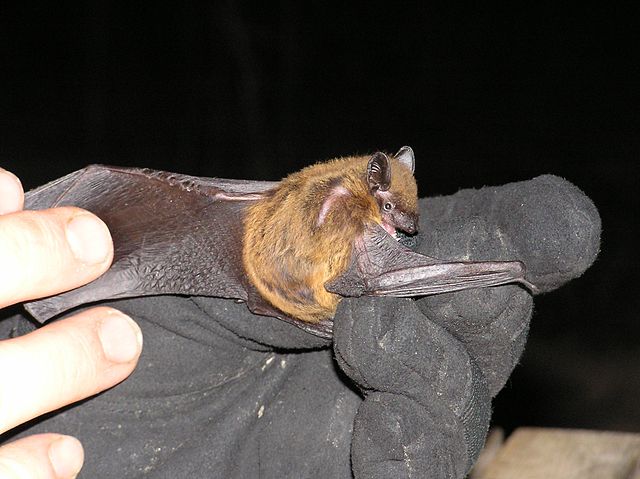 Need bats removed from your attic, vent or home in VA?

The Evening Bat is a rather small brown bat with short, sparse, dull brown fur. The average total length is 75-105 mm, and the weight 5-6 grams or 1/4-1/3 ounce. This species resembles a small big brown bat. The usual litter size is two young that are born in sex-segregated nursery colonies of up to several hundred in May and June. The reproductive pattern of this species is virtually unknown, but in other temperate zone Vespertilionid species, breeding occurs in fall and sperm is stored in the female reproductive tract until spring when ovulation and fertilization occurs. Two young are born in June and are capable of foraging on their own three weeks after birth.

This species inhabits buildings, and tree cavities in the summer. It emerges to forage early. They are slow, with steady flight often higher in evening than later night. They are not a cave user, but individuals sometimes swarm by entrances with other species. The winter habitat is unsure. The population in one study had an average 2 year life span although several over 5 years were found.

The Evening bats are known to be present only from the eastern part of Virginia in the Coastal Plain and lower Piedmont Provinces, but further collection may show it to occur in the lower southwestern counties. They are suspected of migrating south but winter roosts are unknown. They use man-made structures and abandoned tree holes as roosts during the summer.

The Evening bat is generally thought to be migratory, but recent work suggests that some individuals may be non-migratory, even near the northern edge of their range. During winter, individuals continue to roost in tree cavities or buildings, and they may forage on warm days.

The Evening Bat is an insectivore and is known to eat a number of pest species while foraging over open fields. They start foraging about 1/2 hour before dusk.