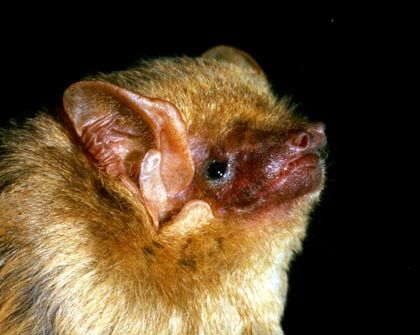 I Have a Bat in the Attic of My Virginia Home. Get Rid of Bats in VA.

The Northern Yellow Bat is a large, pale, yellowish-brown bat with long wings. The ears are short, broad and rounded and the fur is long and silky, and the tips of the hairs are often gray or brown. The average total length is 115 mm (4.5 inches) and a wingspread of about 375 mm. The females are larger than the males. Mating occurs during flight in the fall (and occasionally winter), and although females may have three or four embryos in the spring, typically only twins are born in late May or early June. If their maternity roost is disturbed, mother yellow bats will pick up their pups and carry them to a safer roost. Baby bats become volant (able to fly) between June and August, and will form evening feeding aggregations with adult females while adult males remain solitary. The females form loose colonies during the breeding season. This species is solitary except for females in the breeding season. This species is seldom found in caves or buildings.

As all bats, the Northern Yellow Bat primarily eat insects of all kinds and this species forages approximately 15-20 feet above the ground. The majority of their diet is composed of true bugs, flies, mosquitoes, beetles, leafhoppers, flying ants, and on the rare occasion, damselflies and dragonflies.