Rat Control – we receive a lot of calls for rat removal and rat exterminating in Richmond, Virginia. Most of the calls involve the customer seeing a rat running around their house, or occasionally in the attic or crawlspace. Yesterday was a little different.

Bright and early yesterday morning our office received an emergency call from a customer complaining of noises coming from her toilet. She said something was trapped in the toilet and was trying to get out. As you can imagine, she was not only surprised, but terrified, and wanted a wildlife removal technician sent out as soon as possible. Batman, I mean rat-man to the rescue.

Although not all that common, from time to time we do have incidents where rats in Richmond VA have followed a sewer line into an unsuspecting residents home. Two of our technicians arrived at the residence to save the day. After arriving at the home and calming the customer, they gathered their tools to begin removing the rat. Their biggest concern was containing the rat in the toilet and not having it escape into the house. Approaching the toilet they found the seat had been duct taped shut and a brick placed on top for additional security. The customer said she continued to hear the critter splashing around inside like Mark Spitz at an Olympic swim meet. Pictured below is the suspected rat trap as seen by our technicians. 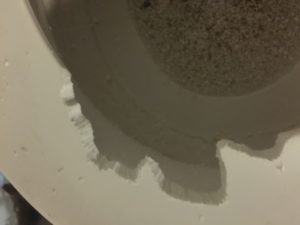 What did they find you might ask. Was it the mother of all rats in Richmond? Did it attack the technicians, I heard rat bites are dangerous? Well not quite that exciting. Wait for it …. nothing! Gone, disappeared, notta. Had the rat returned from whence it came? In all likely hood, but not without first trying to get out of the toilet. Rats are notorious chewers. With their very sharp incisors they can chew threw most materials. The toilet held up to the rats attack, but was mortally wounded in the process. Check out the picture to the left. 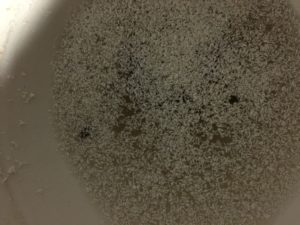 So what did we do to find the rat you might ask? “We” assigned the task of searching the toilet water to my junior partner who after several minutes of searching the murky abyss, announced, “the rat is gone.” Impossible, I said. No rat in Richmond VA would dare swim back through the sewer system. After a few more minutes of probing and searching, and after finding a sluggishly response toilet I concluded, the rat had died at sea. We continued to purge and recheck the functionality of the toilet and after determining that the commode was rat free we considered the case close. Well not quite. We did check the immediate area any signs of rats, and checked the exterior of the home for burrows created by Norway rats living in Richmond. Having found none we debriefed the customer and declared the case closed and her home rat free.

Do you live in Richmond VA and are having problems with rats? If so, give us a call for local rat removal and rat exterminating. We are considered by many to be the best local rat control company in Richmond. We go the extra mile by trying to figure out how the rats are getting into your home and rat proofing the structure to help keep rats out. In the meantime, beware of those swimming rats in the toilet!

Need more information on RATS AND THEIR DISEASES.