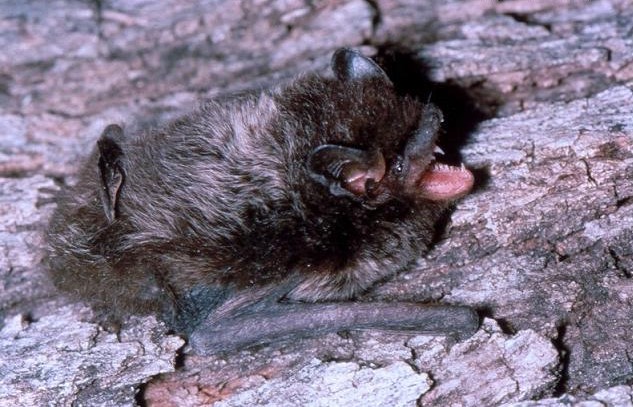 Virginia Bat Removal performed by experts in the industry.

The Silver-haired bat is a medium-sized bat, about 3 3/4 to 4 5/8 inches long, with long, brownish-black silver-tipped fur which is its distinguishing characteristic. Mating probably occurs in autumn, and fertilization delayed until spring. Usually two young are born in late June to early July. They fly slowly and at heights of 20 feet or more in or near mixed or coniferous forest, adjacent to water. They are somewhat solitary bats though maternity colonies may be formed. The males and females spend fall and winter in the same southern areas but in the spring the females migrate further north than the males. They roost mainly in abandoned woodpecker holes or under loose bark and are only occasionally found in caves. Life expectancy can be up to 12 years.

The silver-haired bat is found throughout the entire state of Virginia, as well as, throughout the United States. It will frequently occur around streams, rivers and woodland ponds with tree crevices being the most common shelter/roosts.

Even though they are highly dependent upon Old Growth forest areas for roosts, silver-haired bats feed predominantly in disturbed areas, sometimes at tree-top level, but often in small clearings and along roadways or water courses. Though their diets vary widely, these bats feed chiefly on small, soft-bodied insects. Silver-haired bats have been known to take flies, midges, leafhoppers, moths, mosquitoes, beetles, crane flies, lacewings, caddisflies, ants, crickets, and occasional spiders. Beetles are the principal food of the Silver-haired bat, but moths seemed to be the main food throughout the winter in the Dismal Swamp.