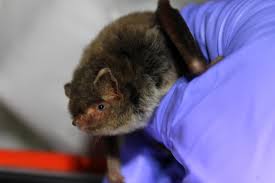 The Southeastern Myotis Bat species is very similar in appearance to Myotis lucifugus (little brown bat), but can be distinguished due to its shorter, thicker, wolly fur. The fur on the back is a gray-brown to orange brown with the belly being more of a buff color. This species has long hairs on its toes that actually extend beyond the claws. This bat is between 77 and 97 mm in total length including the tail and weighs 5 to 8 g. In the northern part of the range (including VA), this species may hibernate for as many as 7 months and in clusters of up to 100 individuals. Mating occurs in the fall, but the sperm is stored in the uterus of the female (delayed fertilization) through winter. Ovulation and fertilization takes place in the spring and typically two young are born in April or May. These bats form large nursery colonies.

The range of the Southeastern Myotis Bat species in the US extends from extreme southeastern Virginia west to Texas and south to Florida. There are very few documentations of this species in Virginia. Those that do exist are along the Blackwater River near Zuni, VA. In the summer, this species uses caves as roosting sites where in the winter it typically prefers hollow trees, mines, caves, and buildings. The roosting site is always near a permanent body of water.