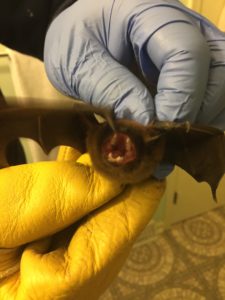 Our company performs bat removal services throughout the State of Virginia, but not in the winter. We are often called to remove bats from homes during the Winter months by panicked homeowners who have found a bat inside their house. Contrary to what they have been told by the so called bat experts, they are surprised when we tell them that you cannot remove bats from a structure during the Winter. Why they ask.

Why Are There Bats In My House In The Winter

Most people are surprised when they find a bat inside the living spaces of their home during the Winter months, particularly when we’ve all been told that bats hibernate during the Winter. The reason is quite simple though. With the onset of colder weather, bats that have been loving in structures do one of two things:

1) They leave their Summer roosts traveling to their Winter hibernation locations (their hibernaculum) where they spend the Winter, or

2) They stay at their Summer roost sites and try to find a warm place in the structure in which to spend the Winter – herein lies the problem.

When choosing a place in a structure to overwinter, bats sometimes make poor decisions. The warm location they chose in October may not be as comfortable when we get into colder months of January and February. Because bats have an uncanny ability to detect minute changes in temperature and air flow, they will often feel the warmer temperatures radiating from the living spaces of a home. In their efforts to adjust for their poor decision, they often end up finding an opening large enough to allow their entry in the warmer living spaces of a home. Their presence in our living spaces causes fear and panic. A bat in the living space of a home during the winter is almost always an indication that you have bats roosting somewhere in the structure.

Why Bats Cannot Be Removed From Structures During The Winter

Our technicians are experts at getting rid of bats, but they know Wintertime bat removal is impossible. The reason is quite simple. Removing bats from structures involving using the bats natural behavior of leaving a structure to feed. During the Winter months, insects which are the primary food source for bats in most areas go into a dormant state called diapause. Without an available food source in the Winter bats hibernate to survive, living off of their fat reserves. They don’t venture outside during the Winter, with the exception of the occasional bat that may check out conditions during periods of brief warm up.

So What Should I Do If I Find A Bat Inside The Living Spaces During The Winter?

If you are unfortunate enough to find a bat in the living quarters of your home during the Winter we recommend the following:

If you call a “bat removal company” during the Winter months to get rid of a bat problem, and they tell you that they can remove bats during the Winter you should run, not walk, as fast as you can from this company. They are either a ripoff company or they don’t know what they’re doing. Always look for a company that is NWCOA Bat Standards Certified – like we are.