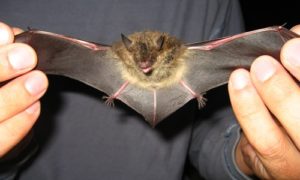 Bat Removal In The Winter

So you’ve had bats in the attic of your home all summer and, now that winter has arrived, you want to get rid of them. Well, you may be out of luck and forced to live with these unwanted house guests until spring. In Virginia, particularly in the Richmond and Charlottesville areas of Central VA, we have two main bat species that enter our homes – the Little Brown bat (Myotis lucifugus) and the Big Brown bat (Eptesicus fuscus). Both species are considered cave bats, and in a perfect world that’s one of the most common places for them to live. The other place they like to live is in the attic and vents of our home. Before we discuss wintertime bat removal we must first understand the two bat species that most often enter our homes.

The Little Brown bat is one of the most common bats in North America. It name comes from its fur color which is uniformly dark brown and glossy on the back and upper body. Adult bats are typically 6–10 cm (2.4–3.9 in) long and weigh 5–14 grams (0.2–0.5 oz). Females tend to be larger than males.

The little brown bat lives in three different roosting sites: day roosts, night roost and hibernation roosts. Bats use day and night roosts during spring, summer, and fall. Hibernacula are for winter use. Day roosts are in buildings or trees, under rocks or wood piles and sometimes in caves.

Nursery roosts are found in both natural hollows and in buildings (or at least close to them). Nursery roosts have also been found under the sheet metal roofs of trappers’ caches and attics of buildings.

Little Brown bats typically hibernate in caves and perhaps unused mines, but if your home meets the comfort requirements of the bats, then your home becomes their hibernation location. Even if the bats leave your home for another winter hibernation location, they more than likely return in the spring. Southern populations of bats enter hibernation in November and end in mid-March. Little brown bats are not true hibernators. As observed in the Mid-Atlantic States during periods of warming during the winter, typically over 50 degrees (F), little brown bats emerge from their winter torpor and hunt insects that have emerged as well in response to the warmer conditions.

Little brown bats are insectivores, eating moths, wasps, beetles, gnats, mosquitoes, midges and mayflies. Since many of their preferred meals are insects with an aquatic life stage, such as mosquitoes, they prefer to roost near water. Brown bats forage near bodies of water and move in and out of adjacent vegetation. If they do not catch any food, they will enter a torpor similar to hibernation that day, awakening at night to hunt again.

Little Brown bats live approximately 6 to 7 years and often live well beyond 10 years. Brown bats are prey for a variety of animals, including small carnivores, birds, rats and snakes. These bats are also hosts for various parasites such as fleas, bat bugs and lice. They have low levels of rabies based on our experience.

In the wild, little brown bats are very active during the day in the spring months, they are heard loudly squeaking, shuffling position and hanging out the bottom of the bat house during all hours of the daytime. The average sleep time of a little brown bat in captivity is 19.9 hours per day. This long period of sleep a way of conserving energy, by only hunting for a few hours each night when their insect prey is available.

As with most bats, the little brown bat is mostly active at night and leaves its roost at dusk and the next two or three hours are peak activity periods. They are also active before dawn. Since little brown bats live in a temperate zone, they must find some way of dealing with winter. Most temperate bats either migrate or hibernate, but little brown bats do both. In summer, the males and females live apart, the females raise the young. When fall comes, both sexes fly south to a hibernaculum, where they mate and then hibernate. Little brown bats undergo a prolonged period of hibernation during the winter due to the lack of food.

The Big Brown bat (Eptesicus fuscus) is native to Virginia and other parts of North America.

Big brown bats are nocturnal. They roost during the day in hollow trees, beneath loose tree bark, in the crevices of rocks, or in man-made structures such as attics, barns, old buildings, eaves, and window shutters. Big brown bats navigate through the night skies by use of echolocation, producing ultrasonic sounds through the mouth or nose. They also produce an audible sound during flight, a click or a sound like escaping steam.

Big brown bats are insectivorous, eating many kinds of night-flying insects including moths, beetles, and wasps which they capture in flight. This causes the sudden, frequent changes in direction.

Big brown bats hibernate during the winter months, often in different locations from their summer roosts. Winter roosts tend to be natural subterranean locations such as caves and underground mines where temperatures remain stable, but if your home meets the comfort requirements of the bats, then your home becomes their hibernation location. Even if the bats leave your home for another winter hibernation location, they more than likely return in the spring. Where a large majority of these bats spend the winter is still unknown. If the weather warms enough, they may awaken to seek water, and even breed.

Big brown bats mate sporadically from November through March. After the breeding season, pregnant females separate themselves into maternity colonies. In the Richmond and Charlottesville areas of Central Virginia, twins are commonly born sometime in June.

Bat Removal In Winter – The Problem

The reason that bat removal in the winter is a problem is the inactivity of bats during this period. The bat removal process uses the bats’ behavior of leaving their roosting site to feed to remove them from structures. All bats do not leave a structure every night, especially in the winter when food is scarce. Bats depend on their fat reserves for survival. That is why they hibernate in the winter. Also, all bats do not leave a structure at the same time each night if they leave at all. Reputable bat control companies only remove bats before and after the bat birthing season, except in cases of increased health risk to the property occupants. Some bats are protected by federal and state law, and the best companies do not want to harm bats or orphan the baby bats.

Need additional information on bats in the attic and bat removal in Virginia? Click here or visit virginia-wildlife-removal.com/bats. We are your bat pros providing safe and humane bat removal, call us at (804) 729-0046 or toll-free at (888) 824-7383.